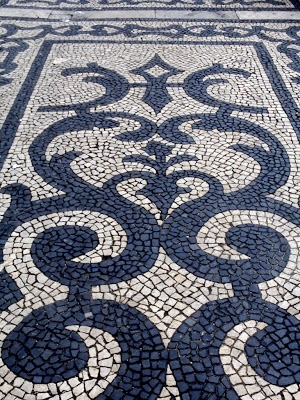 In June of 1987 I left the concrete and asphalt pavements of the United States for my first trip to Europe. I graduated 6 years earlier with a degree in Landscape Architecture from the University of Oregon. In lectures, I had been mesmerized by images of the gardens of the Alhambra in Granada and Parque Guell in Barcelona, Spain, so I set off on a kind of pilgrimage to see that part of the World.

Handcut blocks laid in a mosaic sidewalk in Lisbon

I traveled first from Madrid to Lisbon, Portugal, where I had an epiphany. Here is a city encrusted in mosaics made from small hand split blocks of white limestone and black basalt. Every plaza and sidewalk has a different design, so anywhere I went I was looking at marvelous decorative pavements, something I never seen back home. Made popular after a wave pattern mosaics built during restoration of parts of the city destroyed by a Tsunami after a great earthquake in 1755, this style of stone mosaics has been used throughout the Portuguese Empire, including Brazil.

In Andalusia in Southern Spain I saw extensive mosaic work made of naturally water rounded pebbles. These were built using locally gathered pebbles in shades of black, white and brown set on edge in some kind of bonding medium, possibly sand mixed with dry cement. They seem to be a surface of choice for places of import. Much of the Alhambra and Generalife are paved in pebble mosaic, the current ones being restoration work from the last two centuries. Patterns are usually repetitive geometric forms, but there are some whimsical ones, like the one that mimics the shadow of an adjacent orange tree. A practical benefit during hot summer Mediterranean months is that water could be poured on the mosaics, cooling the surrounding air as it evaporates.

The buildings and gardens designed by Antonio Gaudi in the city of Barcelona are often embellished with mosaic of stone or tile or glass. His buildings are so organic and exquisite as to require such a medium to decorate them.

So when I returned home I set to work on a patio for my recently purchased home in N.E. Portland. The design was inspired after reading the ‘Tao of Physics’ by Fritjof Capra. Not really knowing the methods of construction in Spain, I developed my own technique, setting the pebbles in a bed of wet mortar that I mix in a wheelbarrow with a hoe, very low tech but successful. I built forms using staked flexible plastic lawn edging strips to make the curves of sub-atomic particular wave energy I was trying to allude to. Spirals occasionally spin off like smashed particles in an atomic accelerator. The overall composition looks like dividing cells. The patio project absorbed all of my extensive pebble collection along with most of my summer. The result was probably the largest pebble mosaic in the Pacific Northwest at that time.

A friend of mine asked me to build a Gaudiesque altar in her garden for her upcoming wedding, so I built a mini La Sagrada Familia in her back yard in the West Hills. But it wasn’t until a few years later that I convinced a client in Northwest Portland to let me build a pebble mosaic patio for him, along with a mosaic path and parking strip pavements. The patio is a 12 by 18 foot Persian Carpet with a numerological pattern that symbolizes the Big Bang and the creation of the universe. I find myself alluding to creation in many of my designs, as I think that is basically what we are meddling with when we garden. That patio has been photographed by Alan Mandell and Jerry Harpur of England, and published several times. It even made the cover of Landscape Architecture Magazine in August of 2005.

Suddenly I was a pebble mosaic artist as well as a garden designer, and I frequently incorporated them in to my projects. I did two very laborious workshops for the Hardy Plant Society, the first at Lucy Hardiman’s, where we built one of four ‘Flying Carpets’ in her new Hell Strip, and the second in the one at Reed College with a planting workshop led by Maurice Horn of Joy Creek Nursery. The mosaic theater masks and a giant question mark are mostly buried in lush foliage now.

Though the pebbles are small, the work is not easy and I don’t do workshops anymore. I have built enough mosaics to merit a book I will eventually write, and I have been lecturing on the art of stonework for a few years now. Numerous winter trips to Asia and South America have inspired a variety of design ideas, melded with the stories of my clients lives and the environments they reside in. Hardy Plant board members Nancy Goldman, Joanna Fuller, and Vanessa Nagel all have pebble mosaics in their beautiful gardens.

I’ve spent a fair amount of my adult life gathering the materials needed to build these mosaics. Each pebble is selected for shape and sorted by color, whether beach combing or sitting on piles of rainbow rock in a stone yard. I have to look at every single one to discern whether it will fit amongst the thousands of it’s brethren.

Because carefully executed, time consuming, and intricate structural elements are eye catching and something of a rarity in American gardens, my work shows up frequently in garden publications. These days I work as much out of town as here in Portland as budgets tend to be skimpier here. I built a magical ‘Council Ring’ fire pit for Dan Hinkley at his wonderful garden at Windcliff surrounded by a patio inspired by the waters of Puget Sound. Most of the stone was gathered from the beach below the property, giving it a strong connection to it’s setting.

The Solstice Fountain in N.E. Portland

Another favorite project were the mosaics I built in the Irvington neighborhood inspired by the paintings of Joan Miro of Spain for a couple who have a strong affinity for his work. The patio is derived from a painting called ‘Siphers and Constellations in Love with a Woman’. Abstracted parts of a woman’s body and face are scattered amongst cosmic symbols and a sinuous line that runs up and down the face of a seat height retaining wall. It is mesmerizing to sit and contemplate this work.

Cyphers and Constellations in Love with a Woman, inspired by the painting by Joan Miro

A swirling and colorful parking strip on N.W. 22nd and Johnson Streets in Portland was inspired by the three Carnivals I celebrated in Brazil, and the work of that country’s most famous landscape architect Roberto Burle Marx. Across the street are older mosaics, including a long DNA molecule, yet another reference to creation.

Friends commissioned a wonderful lotus medallion patio and fountain in San Francisco, and I built several Moroccan inspired mosaics in a garden in Los Angeles over the past few years. Marietta and Ernie O’Byrne at Northwest Garden Nursery in Eugene hired me to build four mosaics in the center of their magical garden. They spent much of their free time collecting stones for the project from rivers and beaches that summer. They put an inflatable mattress on the main circular mosaic and sleep outside on warm evenings under a canopy of stars.

I covered a large water cistern at the Islandwood Environmental School on Bainbridge Island in Washington last year as an artist in residence. Classes of school children helped compose a cylindrical vertical mosaic weighing several tons that tells the story of the geology of the Puget Sound region. It has several niches so that the kids can climb the walls and look in the top, or place objects found on their outings as offerings.

But my favorite venue and guinea pig has always been my home. I built a pair of eyes watching over the threshold to my garden, a Tibetan endless knot, a single niche Persian prayer rug, and a 25 foot long Western Rattlesnake (I still have to make the tail). My most ambitious undertaking has been masonry walls incorporating several antique carved sandstone niches and window frames I shipped back from Rajasthan in India. The niches hold a collection of bronze Buddhas from Thailand, Laos, and Cambodia. There is a Tree of Life in the central niche, and a pool made of gorgeous beach stones from Puget Sound to reflect the wall. Veins of tumbled tiles and special stones found along the shores of the Rio de la Plata in Buenos Aires, Argentina fill the gaps between the stones.

This work is just an expression of my decadent nature. Once I saw the fabulously beautiful gardens of the Moorish Kings of Spain I couldn’t go back to white concrete and asphalt of America and do more of the same. I treasure the Earth, and if I’m going to pave it, I want to create something worthy of it’s magnificence. My hands aren’t tolerating the work like they used to and it is hard to transfer these skills to a dedicated apprentice that has the patience and obsession to detail that is needed to do the work. There aren’t many people as crazy as I am out there. So I’d better write a best seller, har har.

On December 5th I’ll be flying to Madrid and a week later to Fez, Morocco, where I will be spending 3 months revisiting the Alhambra and other beautiful landscapes created by Moorish culture. It is like going back to school in a way, and I’ll take you along for the ride.

Check out the whole article with images from the source link below.