He’s Not Sitting For A Whole Month 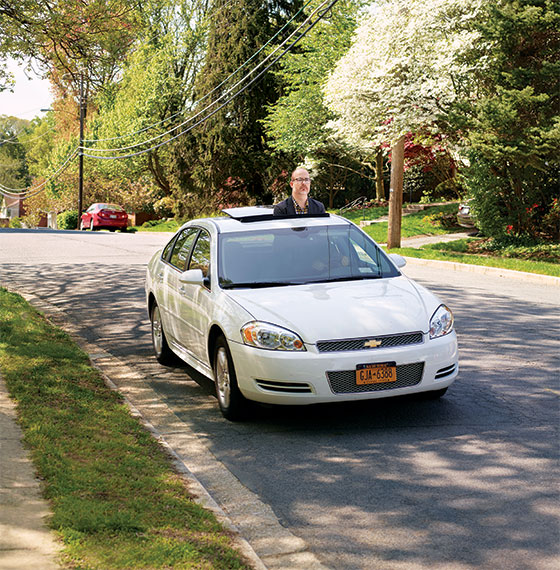 Note: We actually did allow Dan Kois to sit down when driving. Do not attempt this maneuver yourself.

Are you sitting down?

Nice knowin’ ya! If you sit down more than 11 hours a day, one study suggests, you’re 40 percent more likely to die in the next three years than I am. I’m standing up. I’ve been standing up all day. I’ll be standing up all month, in fact, without a break. I expect at the end of that month I’ll be sore but triumphant, glowing with smug enlightenment.

Reading the research, I’ve become convinced that sitting around all day is the worst thing I do to my body—that, like smoking, plopping down on our collective ass makes us profoundly likelier to die earlier. The effects have nothing to do with regular exercise; indeed, it seems that being sedentary when you’re not exercising eliminates many of its benefits. Sitting all day lowers your good cholesterol and raises your risk of diabetes. Sitting down, you burn a single measly calorie each minute.

And so a growing cadre of lean, mean, self-satisfied office workers are exploring standing or even walking on a treadmill at work. They’re trying to maximize their vigor, and also the tiny muscle movements that standing fosters—weight-shifting, stretching, walking around. Sitters, meanwhile, are basically already corpses: Their “muscles go as silent as those of a dead horse,” a researcher memorably told The New York Times Magazine.

If sitting at work is terrible for me, shouldn’t I stop? And if I do, shouldn’t I stop sitting everywhere? I decided to spend a month on my feet: 30 days never being a couch potato, an office slug, a sitting duck. The exceptions, agreed upon with my editor: I would sit to drive (but would strive to take the train); I would sit when nature called. I would also sit to put my shoes on, I decided this morning after falling over trying to put on my shoes. I would lie down to sleep, although I surely wouldn’t need sleep, given that I’d be so healthy.

The Tally of Woe:

9:00 My standing desk hasn’t arrived, so I’ve set my laptop on the kitchen counter atop Gary Larson’s four-inch-thick collection, The Complete Far Side 1980–1994.

9:13 Confident! My wife walks past and says, “You seem impressive.” I feel impressive! These new cross-trainers I’m wearing definitely give me better arch support than most of my shoes.

10:02 I’m already shifting from foot to foot to ease pressure on my back. I bend way over and my vertebrae crackle ominously. Perhaps a stool, upon which the heroic stander may rest one foot while the other bears the load, is in order?

11:24 Time for a short walk. My calves ache, as if standing for three hours is more exercise than I get in one typically slovenly, indolent day. After my walk, I check my fitness stats—I’ve already taken almost as many steps as I did on a typical day last week, and I’ve been up for only three and a half hours.

12:45 Lunch at the counter. Spill mayonnaise on my shirt.

2:41 Definitely having trouble getting work done. The idea of opening up a new document to edit feels crushing, as though each task I take on carries with it the additional burden of standing the whole time. But hey, it’s the first day! I’ll get used to this.

4:02 Made it! Walking to bus stop. Walking feels way better than just standing.

6:00 Lie down in bed for just a second to rest my eyes and fall instantly asleep even though both my kids are shouting at the tops of their lungs in the next room.

7:30 Dinner. The family eats at the table; I eat at the counter. My younger daughter, H., cannot believe what I am doing. She takes my hand and leads me to a chair, as if perhaps I have forgotten we own it. “But why are you not allowed to sit down?” she asks. “Because it’s healthier,” I say. “And a man at a magazine is paying me money.”

8:50 Tennis with a friend. Usually we are very competitive; today I barely avoid getting bageled. Driving to and from the court is a real treat, though.