Tesla and Cummins are making waves right now with their new electric-powered semi trucks, but one other long-range vehicle has yet to make a significant jump to greener pastures – until now. German camper manufacturer Dethleffs has unveiled the e.home concept – a solar-powered electric motorhome.

The idea of an electric motorhome would seem like a great idea, until you realize that many of the remote locations that you’d be traveling to probably don’t have the charging infrastructure you would need. That’s where the e.home concept comes in. Since it’s a solar-powered motorhome, it can use the power of the sun to recharge the motorhome’s battery pack. 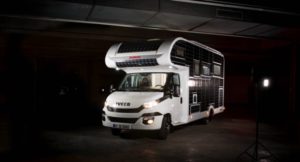 The e.home is built on Dethleffs Iveco Daily Electric chassis. The Iveco Daily is powered by a 107-hp electric motor with several different battery options, but the largest gives it a range up to 174 miles on the European Cycle, in non-camper trim. With the extra weight of the camper, the range of the e.home concept drops to just over 100 miles. That short driving range won’t really matter, since the e.home has 334 square feet of thin-film solar panels on its exterior. The solar panels can generate up to 3,000 watts of electricity to power the 228-Ah sodium-nickel-chloride battery. 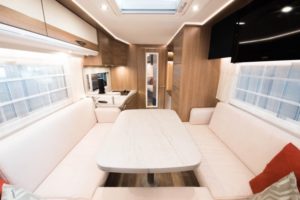 Besides the solar panels and electric motor, there are other efficient tricks to the e.home concept, like a heating system that uses phase change materials to absorb heat when the outside temperature rises above 79°. The heat is then released into the cabin when the temperature drops at night. There are also infrared heating panels in the floor, walls and furniture.

There are also some driver assistance technologies in the e.home, like the Mobileye-based front vehicle monitoring system and the CampConnect app.