Harden up, soften the blow: How hard water softeners work 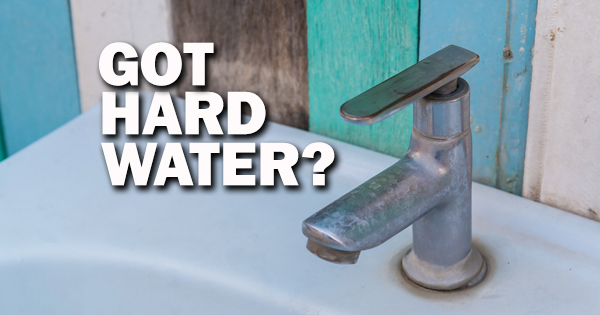 What’s in your water? It is a very pertinent question given some of the recent failings of large water providers and the increase in reports of hard water issues coming from densely populated cities.

Assuming that your water is safe to drink, we are going to examine another issue that wreaks havoc on your clothes, cars, plumbing and appliances – the dreaded hard water.

What is hard water?

Simply put hard water contains high levels of minerals such as magnesium and calcium which are found in the chalk and limestone build-up on piping, fixtures and inside water-run appliances.

The accumulation of limestone and calcium is similar to a blocked artery in that the passageway becomes restricted and will eventually lead to a complete obstruction of water flow.

That pressure build up inside blocked piping can be extremely dangerous depending on the amount of pressure and the heat of the water being pumped through the lines. On a commercial scale, a failure like this could cause severe injuries.

While there is a small amount of research that hard water can have moderate health benefits, it is a death knell for appliances, car paint, and clothing fibers especially in a commercial setting. We will explore the health aspect later in the article.

Back to the equipment side of the analysis, businesses in particular need to be aware of the water hardness of the influx liquid that is fueling their equipment.

Industrial boilers and water systems can be irreversibly damaged from hard water and can prove to be a costly drama if mitigation strategies are not in place to soften or filter the water accordingly.

Let’s look at some statistics to see just why you should care about the hardness of your water. A heavily encrusted pipeline or fitting can cause a 75% reduction in flow pressure and on average a 20% reduction in efficiency per run hour, based on recent studies.

The temporary water hardness bicarbonates can be remedied by simply boiling the water. The permanent hard water can only be filtered to remove particles that cannot be broken down and dissolved by boiling water.

Luckily for consumers, people in white coats have spent far too many weekends in a laboratory testing water filtration technologies to save your clothes, cars, appliances and plumbing from the inevitable build-up of calcium, limestone and soap “scum”.

Water softeners are effective at doing just what they say they will – reducing the hardness/selected chemical levels of your water. It is a simple filtration process whereby the less desirable minerals are captured before water passes through to the individual piping in your home and onto your appliances.

Hard water symptoms can be found all around the home or business. For example, if when washing your car you find white spots after the drying process than it is safe to say the water contains high levels of the hardening minerals and needs to be filtrated.

You will also notice it in the stiffness of clothes as the calcification process cakes the mineral build-up into the fibers of the clothes and reduces their longevity as the material becomes harder to clean.

A lot of detergents these days are formulated in a way that offers mild help to softening water it comes into contact with, however for cases where the water measures high on the hardness scale a water softener is the only way to actually reduce the mineral levels in the water.

Let’s have a look how a water softener works. The water softener is plumbed into your house or building’s main water lines. This appliance aims to treat the water before it reaches the internal plumbing circuitry which feeds your appliances and taps.

The anatomy of a water softener is pretty straightforward as it contains two main tanks – a mineral tank lined with negatively charged beads and a salt/brine tank.

The benchmark water softeners are fitted out with an automatic regenerating system whereas the budget models are equipped with a very basic timer to recharge the flush the system periodically.

With the basic models, softened water is not available when the unit is in its “recharge cycle” as opposed to the more complex [read expensive also] models that offer different levels of softened water available for limited usage during a recharge phase.

Some top of the line units are fitted with dual tanks meaning softened water is available at all times regardless of whether the unit is recharging or not.

Essentially a water softener works like this; hard water enters the unit from the main plumbing line, filters through the mineral tank in the unit and thanks to an ion exchange the unwanted calcium and magnesium ions in the water cling to beads inside the unit.

To get your fill of nerd in today, the beads carry a negative charge and calcium and magnesium carry a positive charge. So, as these two partners in crime pass through the system they are attracted to the beads through those lovely laws of physics.

When the water is reticulated out of the unit the hardness has been markedly reduced as a result of the lower levels of calcium and magnesium. Simple, right? Well kind of.

The units require maintenance like all appliances do, but when considering the benefits derived from softening the water it is worthwhile in the long run.

Most units require salt infusion through the simple delivery method of tipping in the required amount every so often. Depending on models, the data displayed will alert you to the salinity levels in the unit.

Saline or brine water (salty water in the unit) is required for the units to work effectively. Basically the sodium ions will be sent in to the mineral tank during the recharging/regenerating phase to bump the freeloading calcium and magnesium off the beads and down the drain.

A study conducted in several high-impact regions for hard water recently showed some interesting things in terms of softening the water.

Post softening of the water in the controlled group study, the participants reported less calcification accumulation inside piping and at entry/exit points and an improvement in the texture damage of the clothing fibers.

There are reports that water softeners aren’t value for money, however that is difficult to agree with given the data and testing results from a myriad of sources.

Water testing is fairly simple and it is easy to detect the levels of the minerals in the water. Anecdotal evidence also shows a high rate of success in reducing piping and plumbing encrustation when a water softening system is installed into the household/commercial property.

According to an in-depth study conducted late 2016, water hardness is measured in grains per gallon (GPG) or milligrams per liter. Water up to 1 GPG (or 17.1 mg/l) is classified as soft, while water ranging between 60 to 120 GPG is rated as moderately hard.

Pressure of inbound water impacts the water softener’s efficacy to maximize softening efforts so investigations into flow pressure should be undertaken if the unit’s performance is in question.

Of note is the observation that water measured at over 100 GPG may still not be absolutely softened but is obviously closer to the desired parameters.

There are also non-plumbed models available, however many tests have shown them to be less effective than the plumbed-in units.

These waterless units operate by transmitting a continuous dynamic electro-chemical wave signal from an onboard computer.

Turning an eye to the health aspect of soft versus hard water there is limited yet fairly clear evidence that hard water poses no real health risks to humans, however excess calcium in water does pose a risk for kidney stones.

Otherwise, it is really the affects hard water has on plumbing, machinery and clothing that warrants the use of a water softener. The water softeners are effective in managing hard water areas of operation.

The presence of hard water will drastically reduce the life of your appliances and in problematic regions will be a constant annoyance to manage unless mitigation products are installed.

Pay the relatively small amount of money now for a water softener installation to avoid the pocket pain later!

This signal creates an ionic attraction of the hard water minerals (calcium and magnesium) which purportedly stops them binding to the interior of the piping. This is where the plumbed models have a distinct advantage.

Instead of trapping the calcium and magnesium ions (let’s say particles for this example) in the mineral bead tank to be flushed away later during recharge time, the non-plumbed models simply carry the minerals to the end-user outlet i.e. your taps and hoses.

A filtration system would then be needed at each of the outlet points in our opinion to achieve the actual objective of removing the minerals that cause the hard water issues.

We would stick with the plumbed models purely because there is science to back the claims and the data shows sizeable reductions in water hardness after the water softening process is complete.

The end water product can be 30% softer *on average, based on a generic test site, in which the results of up to 50% were recorded in some testing environments, for the plumbed-in units.

There is one more factor to consider with the water softening process. Some users of softened water do notice a slightly salty taste. It is probable that some users are more attune to noticing elevated salt levels; however it is a reported occurrence.

While the taste difference is minor across testing groups, it is present as a result of the softening process. However, the main reason for softening water is to reduce its damage on inanimate objects, specifically piping, clothing and machinery.

Soft water can be applied to specific regions of a house or business. Consumers often choose to soften water being used for laundry, dishwashing and outdoor hoses and leave the main line to the drinking outlets hardened for taste purposes.

There is mixed reaction to having the water you shower with softened, as soft water can make removing or rinsing detergents (domestic and pharmacological including soaps and cleansers) rather difficult.

The hardness of the water plays a role in dispersing agents present on material or skin. It is for the reason that most experts insist on splitting the softened water pipelines into laundry, hospitality, and general drinking line, general bathing line, ensuring the end user is utilizing the water’s hardness (or lack of) for the most appropriate purpose within the domestic household or commercial setting.

To find out if you are in an area which is plagued by hard water issues, generally your local government is required to provide at least minimal, baseline data on the water quality and the hardness can be determined by the methodology discussed earlier if not explicitly categorized.

Alternatively there are basic water testing kits available online also if you want to drill down and see just what you’re dealing with. A range of contractors will also offer free quotes and limited testing of the water source’s hardness at relatively reasonable rates.