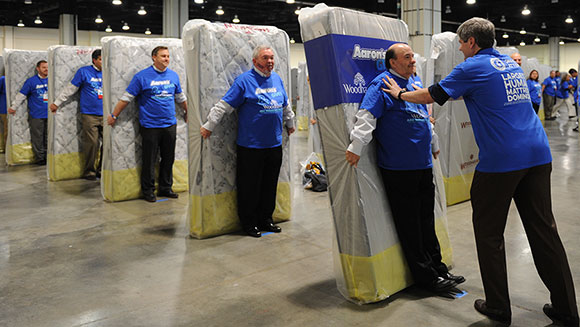 Aaron’s Inc., an appliance and electronics company, has set a new world record for the Largest human mattress dominoes with 1,200 participants making a soft landing during a successful attempt in Maryland, USA.

The feat, which formed part of the firm’s annual managers meeting, was accomplished on the first attempt, taking a total of 13 minutes and 38 seconds to complete the huge topple.

In order to make the record attempt a successful one, the organizers utilized two exhibit halls covering 70,000 square feet at the Gaylord National Resort and Conference Center.

A dominoes expert was on hand to set up 34 rows of mattresses manufactured by Woodhaven Industries, which is owned by Aaron’s. The first mattress was pushed over by Aaron’s CEO John Robinson.

The mattresses used are now set be donated to charitable groups in the Washington, DC area including A Wider Circle, an organization focused on ending individual and family poverty, and to the Sasha Bruce and Wanda Alston youth homeless shelters.

Speaking after the attempt, Mr Robinson said: “Breaking a Guinness World Records title has been a great team building event for the associates we have attending our National Managers meeting,”

“The significance of this event is that through the generosity of our manufacturing plant, Woodhaven, and our ACORP stores, we are able to provide 1,200 beds to needy families in the D.C. area.

“Our associates had great fun participating and knowing their efforts support our mission of giving back to our communities.”

The successful attempt broke the previous record of 1,150 participants set by German company Höffner Möbelgesellschaft GmbH & Co. KG back in 2012.

The record was first achieved by 80 people at the Channel Nine studios in Sydney, Australia in 2009. Attempted and broken on multiple occasions, the record was set again in 2010 by 256 participants from Shenzhen Aidi Furniture Co., Ltd. and students from the North College of Beijing University of Chemical Technology on the set of Zheng Da Zong Yi – Guinness World Records Special in China.